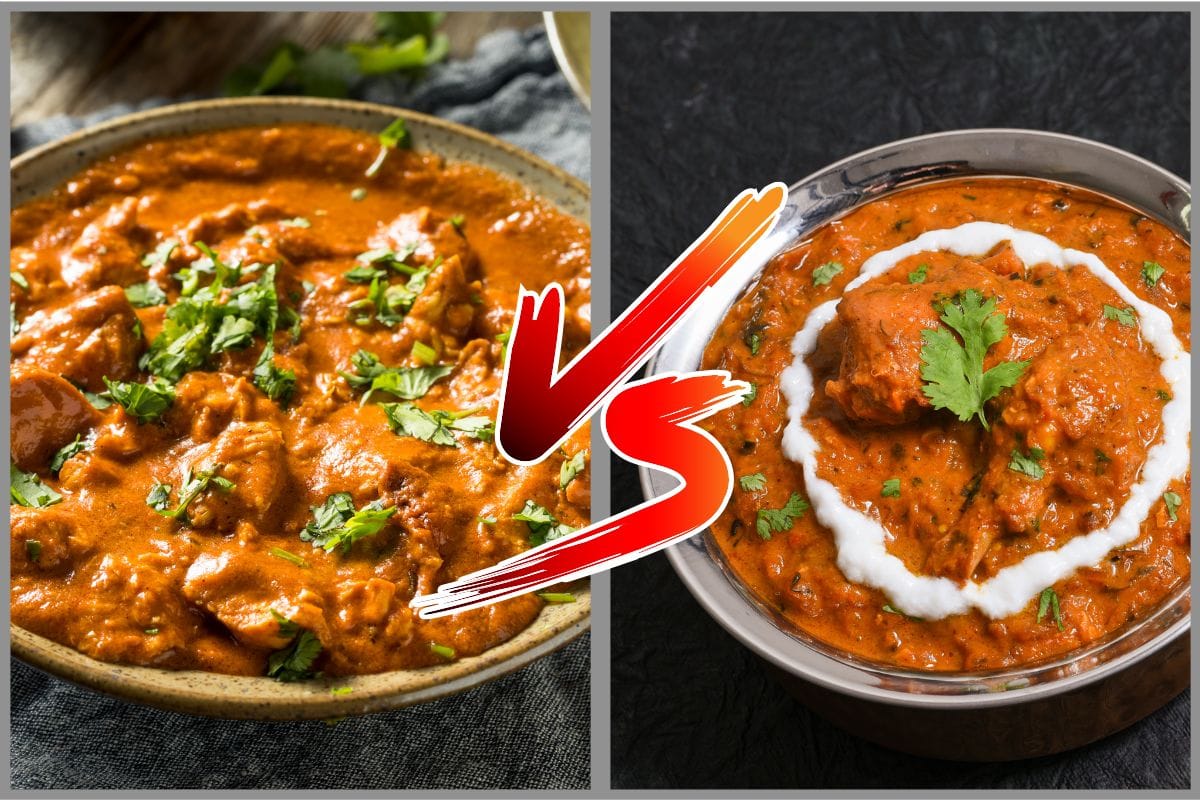 There is a lot more to butter chicken and chicken tikka masala, we will go into detail about both to bring you the ultimate guide in telling the differences between these two amazing dishes!

The Meaning of Tikka Masala

The chicken tikka masala is chicken chunks (chicken tikka), cooked with curry sauce. The chicken piece is then marinated with garlic, ginger, chili pepper, and other spices. After marinating, the chicken is grilled, then tossed with a creamy tomato-infused sauce for a quick dinner.

Tikka means piece, a term that came from Persians. A masala is a combination of various ground spices and is a typical component of Indian cuisine that makes the food taste a little earthy and spicy.  With that, you can easily deduce that a chicken tikka masala is chicken chunks seasoned with a combination of the ground Indian spice blend.

Chicken tikka masala’s origins are not that clear. Some say it is a true British national dish, while others say it was first made in Bangladesh around the 1970s by Ali Ahmed Aslam – a Bangladeshi chef and owner of the Shish Mahal restaurant. This dish became popular in Britain as chicken breast was considered a dry taste until Tikka Masala was invented. Aslam Ali added spiced tomatoes and mashed potatoes in order to help soothe the dry leftover chicken.

How Did Butter Chicken Get its Name?

Kundan Lal Gujral didn’t want to waste the leftover chicken, so he added a little butter, tomatoes, and masala spices to the gravy and invented butter chicken. In addition, he marinades the cooked chicken pieces with spices and curry.

Butter Chicken is best if the chicken pieces are marinated in garlic, ginger, or curry spices. Afterward, the bits of chicken are cooked to make the sauce creamy and spicy. Tomatoes or tomato sauce are added, and butter-based creamy tomato gravy is then achieved. In addition, there are actually different ways to cook and prepare butter chicken, and it just depends on what region you’re in.

It can be hard to decide which food is better, especially if both foods taste as good as they look. Everything comes down to the type of food profile that you enjoy the most. Though they appear similar and use almost the same ingredients, such as ground cumin, ground coriander, and red chili pepper, these meals don’t have the same flavor experience.

The butter chicken or Murgh Makhani has a mildly sweet flavor, is creamier, less spicy, and with less of that tomato flavor. If you are someone who tends to enjoy a “milder” Indian dish, Butter Chicken would be perfect for you. The sweetness of the dish is not overpowering the spices used to flavor the chicken but instead compliments it.

But for those who like to challenge themselves with spicier Indian food, Chicken Tikka Masala is a great fit. Chicken Tikka masala is made of hot spices that complement each other, so the flavor is more robust than butter chicken. The heat level can be categorized as medium-high heat, which is perfect for people who appreciate any spicy sauce.

Since the two dishes are so similar, they are often interchanged, but while looking at how these dishes are cooked. It is clear to see that the spices and flavorings might be the same, but the portions of these spices and flavorings affect the overall taste. Couple that with the difference in the cooking method, and you will see the difference between the two dishes.

Butter chicken is a dish with fewer tomatoes and much more cream added. This makes it a savory dish that everyone loves, however, it contains about 440 calories per serving because of the amount of cream used to make this dish.

This makes butter chicken a high-fat meal because of both the butter and cream present in the dish. Butter and cream are considered high-saturated fats, and high intakes of this saturated fat can increase the cholesterol levels in your blood.

One serving of this dish may contain around 28 grams of total fat, with 12 grams of saturated fat – depending on the recipe. According to the Cleveland Clinic, saturated fats should be kept to around 22 grams daily for a 2,000-calorie diet.

On the contrary, the tandoori Chicken Tikka Masala has a total of 400 – 500 calories per cup! If you want to cut down on your carbohydrate intake, you can opt to skip eating this dish with Naan bread and go for steamed veggies instead. The reason this dish has low fat and carbohydrate count is because of the way it is cooked. There is very little oil added to this meal.

One 16.3-ounce serving of this dish contains 19 grams of fat only. Depending on the recipe, the seasonings that are mostly used to flavor this dish also contain great health benefits. Turmeric contains a chemical called Curcumin, which might reduce inflammation. Tomatoes have calcium, potassium, vitamin A and vitamin C. Chilies contain an anti-inflammatory chemical called Capsaicin, while coriander is a great source of vitamins A, C, and K.

Dish Similarities: The Things that Confuses your Palate

Butter Chicken and Chicken Tikka Masala are popular dishes that came from the land of diversity, India. These two flavorful dishes have been known to be the comfort food that everyone wants, and that’s why it has made their way to hungry tummies around the world.

The very reason why people often say that Butter Chicken and Chicken Tikka Masala are the same or have similarities is because of the ingredients that were used to make these dishes. Some main ingredients that the two both have been chicken, garam masala, red chili powder, turmeric, ground cumin, coriander, butter, and milk or cream. Other spices are present too, but these are the spice blend that is almost always present in both dishes.

Other flavorings in the dishes are Indian curry sauce, tomato paste or canned tomatoes, coconut milk, and spiced tomato gravy. Both have a creamy tomato-based sauce according to the original Indian version of the dish. You’ll frequently see both dishes as part of any Indian restaurant menu.

Butter Chicken and Tikka Masala are both enjoyed with roti, fluffy basmati rice, or even with any rice that would be available at your home. And just a fun fact! Tikka masala is also known as India’s pizza because they said that it would be best with naan bread. It is an Indian cuisine that will surely find its way to your list of dishes to try.

A little tip for you here: The next time you go to the grocery store, instead of buying choice cut chicken meat, buy a whole chicken and have the breast separated from the rest and then use the breast partly to cook your Chicken Masala and use the remaining parts to cook your Butter Chicken. The spices and flavorings used are almost identical and this will give you a chance to see, taste, and experience for yourself why these dishes get interchanged often.

Now that you know the difference between the two while choosing one dish to try first, here are some things you should consider.

When choosing curry dishes to eat, there is a distinguishable difference when it comes to the color of the dishes.

Tikka Masala will have a darker red shade because of the large number of tomatoes present in the dish, while Butter Chicken will have a lighter and brownish color because the butter is mixed in. The butter cuts down the red hue of the tomatoes in the dish.

The dark red color of the Chicken Masala is typically associated with the dish being spicy, but that is not always the case. The same goes for Butter Chicken, the level of heat in the dish will depend on the person who cooked it or on the recipe.

Butter chicken is a curry dish that will look creamier and saucier compared to Chicken Masala, and that is due to the method of cooking the dishes. We will talk more about the cooking method further in the article.

Tikka Masala often uses boneless chicken breast cuts, so this will have a meatier texture to it. It is served with less sauce unlike Butter Chicken and the meat is firmer.

Butter chicken is cooked together with tomatoes, butter, and spices which gives it a creamy texture and tender meat. It uses chicken chunks rather than just chicken breast, so this will have a combination of firm and tender chicken meat.

Butter Chicken has a milder, more creamy taste compared to Chicken Masala, which is more earthy and savory. Expect less tomato-y taste in Butter Chicken and more of a buttery, savory flavor to it with a bit of spiciness. Tikka Masala on the other hand will be less creamy and have that tomato flavor bursting in every bite and a spicy kick at the end.

With Chicken Tikka Masala, the chicken thighs are marinated in yogurt and spices before it is skewered and cooked in a tandoor. This cooking method gives the chicken meat that distinctive earthy, smoked flavor that is missing in Butter Chicken. The chicken is not stewed in the sauce, instead, the creamy blend sauce is often cooked separately with added onions, garlic, and ginger.

Winner, Winner, Chicken Dinner!: The Best Choice For You

It’s really hard to choose between the two dishes. Even though both have the same flavor profile, they still taste different compared to the other. It would be easier to ask yourself which one is better for you, rather than asking which of the dishes is better. People have different preferences, after all.

For a more savory, creamy, and hearty dish, you can opt for the Butter Chicken since this is cooked like a stew and will give you that texture and appearance as well. The original recipe will not have that much spice in it, but expect to get that distinct Indian flavor as you dig in. Even if the creamy curry sauce cools, you will be able to eat butter chicken and still enjoy it.

People who are more adventurous when it comes to their food will appreciate Chicken Masala better. It has an earthy, robust, and smoky flavor that is very reminiscent of a char-grilled recipe. You get a spicy kick to this dish that will leave your taste buds tingling with delight.

I have to remind you here that not all recipes are the same, there are different variations of these dishes, and you might find a Butter Chicken that has chilies added in to get more heat, or you might find a Chicken Tikka Masala that is pan-fried rather than grilled or cooked in a tandoor.

Don’t be disappointed if that is the case. It is only normal to have recipe variations and all you have to do is find a recipe or a restaurant that suits your taste and then maybe create a variation of your own.

To Wrap it up in a Roti

There is no denying that Chicken Tikka Masala and Butter Chicken are both unique; with their aroma and savory sauce, it is for sure a delectable dish! If you prefer a sweet, buttery, and creamier chicken, go for Butter chicken, but if you are someone who wants a challenge, then get that spicier and stronger Chicken Tikka Masala. Let us know what you think about it! Enjoy! 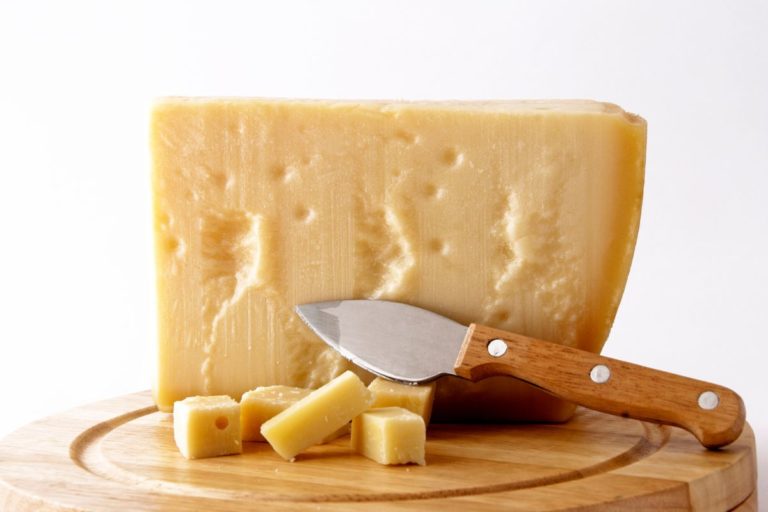 Grana Padano is hard, Italian cheese that was made in the Po River Valley. Grana Padano falls into the nutty profiled cheese. In simple words,… 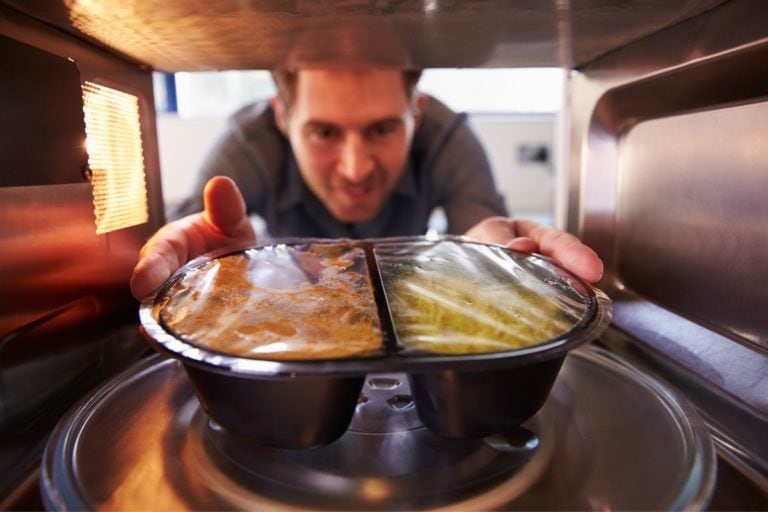 Microwave ovens are now commonplace and used in almost every home. They make cooking and reheating food quick and effortless, ideal for modern life. One…