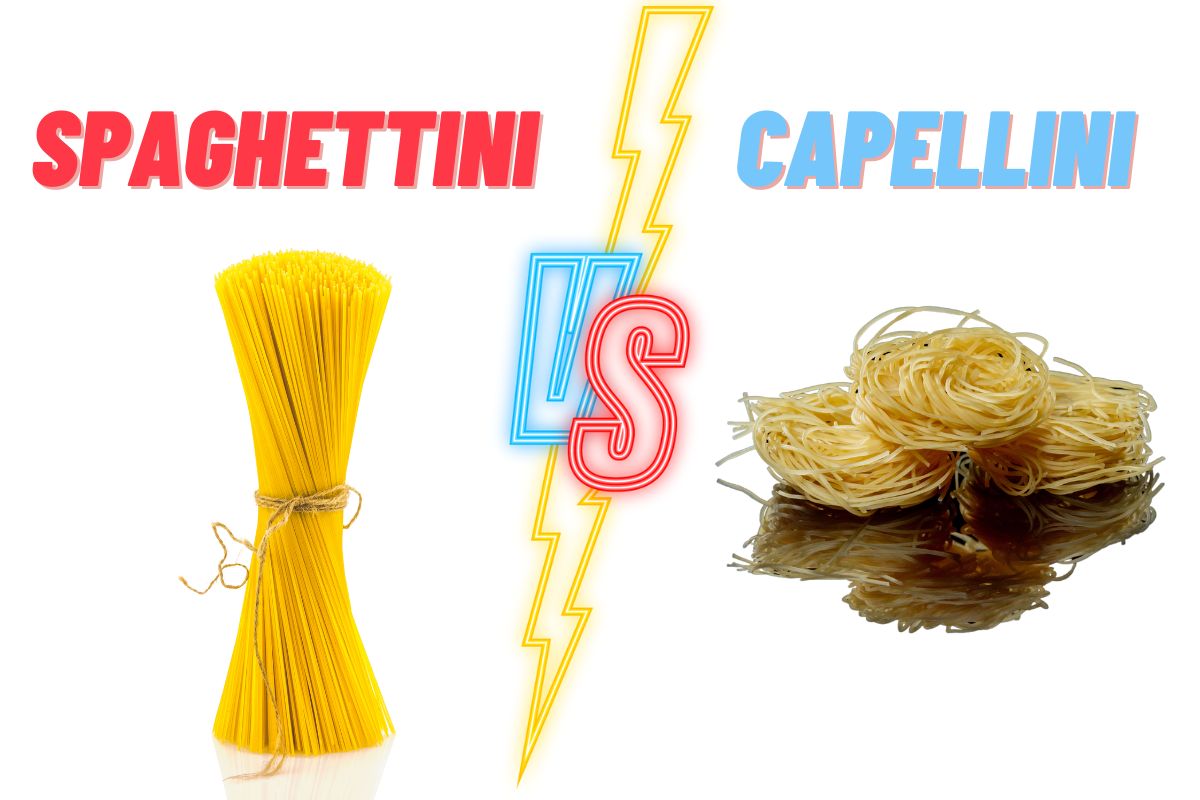 There are so many different types of pasta that it isn’t easy to know which is which, so in this post, I will explain the difference between spaghettini vs capellini and how to tell them apart.

Although the width is the main difference between these noodle-style pasta varieties, there are specific reasons why you may use one over the other.

Let’s take a closer look at spaghettini and capellini to better understand what they are and how they should be used.

Spaghettini is a variety of spaghetti, and if you pay little attention, you may think both words are the same.

The word spaghetti is Italian and describes a long, thin, cylindrical variety of pasta. If you want to take it a step further, spaghetti is the plural of spaghetto or spago, which translates to “thin string” or “twine.”

Spaghetti is one of the most commonly used varieties of pasta, but spaghettini and capellini are thinner and better suited to specific dishes. There is also a thicker version of spaghetti that is called spaghettoni.

Spaghettini is similar in color to spaghetti but may have a lighter tone if made with lighter refined flour. Wholemeal spaghettini will have a darker brown color.

The length of spaghettini noodles can vary, but they are typically around 25cm long, which makes them slightly shorter than spaghetti noodles.

How Is Spaghettini Made

Spaghettini is made using the same process as spaghetti. The traditional ingredient is semolina flour which is high in fiber, gluten, and protein. Once cooked, spaghettini has the benefit of a long shelf life.

When making spaghettini, the dough is extruded through a die that is smaller in diameter than used for spaghetti or spaghettoni. The thinner diameter of the spaghettini makes it better suited for lighter sauces.

Capellini, also known as angel hair pasta, is a long, thin variety of spaghetti with a diameter of 0.85mm to 0.95mm. The word capellini comes from the Italian word for “hair,” which is one of the thinnest varieties of pasta available.

Capellini is often used in soup as it can cook quickly and does not need to be pre-soaked. Capellini can also be used with various sauces, but it is best suited to lighter sauces due to its thin diameter.

Capellini is similar in appearance to all of the long, thin pasta varieties, but as it is the thinnest, it looks much more delicate. When cooked, capellini is often formed into a nest and placed in the center of a soup bowl.

The length of capellini noodles can vary, but they are typically around 25cm long, which makes them slightly shorter than spaghetti noodles.

How Is Capellini Made

Capellini is made using the same process and ingredients as spaghettini, however, the dough is extruded through an even smaller die, creating an even thinner noodle.

When To Use Spaghettini Pasta

While spaghettini can be used for any pasta dish, it is best suited to dishes with lighter sauces, such as pesto or garlic and oil dishes. The slightly thicker diameter of spaghettini allows it to hold more sauce than capellini while being thin enough to allow delicate flavors through.

Spaghettini can still be used in heartier dishes such as bolognese. Still, the thicker sauces will slide off much easier than they would when using spaghetti or spaghettoni.

When To Use Capellini

Capellini should be used for dishes where a much lighter pasta is desired, such as soups or salads. The delicate flavor of capellini is best paired with light sauces or used without sauce altogether.

The most common dishes that use capellini are broth-based soups and seafood salads. The capellini can be used more like a dressing or as the main ingredient.

Be aware that as capellini is so thin, it can be easily overcooked, turning mushy and sticky.

Final Thoughts On Spaghettini VS Capellini

Hopefully, this quick guide has helped you to tell the difference between spaghettini and capellini. Both are long, thin varieties of spaghetti, but spaghettini is slightly thicker than capellini.

Specific recipes are better suited to either capellini or spaghettini, but they can be used interchangeably in many cases. If you can’t find capellini, then spaghettini is a good substitute and vice versa.

When in doubt, go for the pasta that best complements your sauce. Capellini is a good choice if you’re making a lighter sauce. For slightly thicker sauces, spaghettini is a better option.

Are angel hair and capellini the same?

What can I substitute for capellini pasta?

If you need thin pasta but don’t have capellini, you can substitute it with spaghettini or vermicelli. The only difference is that the pasta will be slightly thicker than capellini.

Is Capellini healthier than Spaghettini?

Capellini and spaghettini are made from the same ingredients, so they will contain the same nutritional values gram for gram. A serving of capellini is typically much smaller than a serving of spaghettini and will have fewer calories.

To get into the details of which one is better than which one, first you need to know what Mostaccioli is and what Penne is….