To get into the details of which one is better than which one, first you need to know what Mostaccioli is and what Penne is. They are pretty much identical to one another, but are these the same? The answer is a bit complicated since they are the same but also they are different in their own way.

Feeling confused? Well, don’t be, because we will take you on a tour of the difference between this two delicious pasta through our article.

Penne is an actual pasta variation. It is made in either ridged variety or smooth variety and these look pretty similar to actual pasta. However, mostaccioli is a type of penne pasta that has a smooth type texture in it. The main basic difference between these two is their shapes and sizes, other than that they are made from almost similar processes and ingredients.

Keep reading to find out more about these two types of pasta.

Penne – What Exactly Is It?

Shape: There is an angle cut in the bottom side of Penne, which has horizontal ridges on the surface. The ridges are the same length as the size of the pasta.

Among all the tubular-shaped pasta, Penne is one of the most famous typed of pasta. When you see this pasta, one thing may come to your mind a pen has been cut into angels and put in a bowl.

Well, the shape of this pasta actually got its inspiration from a quill. The translated name of penne means “pen” and now you understand why it also looks like a pen. Even though there are a lot of varieties of pasta, Penne is one of the most popular variations in the history of pasta records.

Penne pasta is made of safe-to-eat products such as there are no GMO ingredients included while making this pasta. There are two versions available for penne pasta, one is whole wheat and another is white wheat. A gluten-free version of penne pasta is also available, but that’s not sold in a wide variety of shops.

The best penne pasta types are actually durum wheat penne pasta. This is basically a cultivar that is famous for its resilience and hardness. There are also different types of flavors for it, you can get them according to your recipe need.

Mostaccioli – What Is It?

Shape: These are almost identical to Penne pasta, except for these being cut into larger sizes. Italians sometimes describe it as “Little Mustaches”.

You may think mostaccioli is something different, but it is not. In fact, it is actually a variation of penne pasta. In Italy, mostaccioli is commonly known as penne lisce. From its name, you can get the clear idea that penne pasta is related to this pasta since penne is present in the name.

In a simple way, it is a smooth variation of the penne pasta that you eat regularly. Mostaccioli textures are smoother than penne pasta. Durum wheat flour along with semolina is used to make this pasta. But the main ingredient is durum wheat.

If you are looking for the rigid version of penne pasta, this is the one for you.

Penne VS Mostaccioli – The Differences In Detail

Just because Mostaccioli is like Penne pasta, it’s not entirely like penne pasta. Between them, there are some significant differences that make these tubular pastas stand alone from each other.

Also, their taste isn’t the same which differs them more from one another. Some people may like softer pasta, but some like rigid ones.

Depending on the US and other places, we tried to figure out the differences between these two. Hope this table will guide you to make better choices on this pasta.

Can You Substitute Mostaccioli Pasta For Penne Pasta?

Yes, you can. It’s not an impossible task as long as you are not dead serious about the texture and thickness of the pasta. It may taste a bit different than the regular pasta recipe you were planning to have but that won’t be noticeable if you are not that much picky. The sauces you use for penne pasta can fix the taste of mostaccioli.

Mostaccioli vs Penne, which one is good for health?

Ans: While both kinds of pasta are good for health, there is little to compare between these two. Mostaccioli pasta can serve 200 calories with 0% sodium which is great for health. You can get nourishing energy from it. Penne pasta has more fiber and is a good source of vitamin B. So both of this pasta can serve nutrition in their own nutritious way.

Mostaccioli vs Penne, which one tastes better?

Mostaccioli vs Penne, which one has more recipe variation?

Ans: As penne came from a place in Italy that was famous for pasta cooking, there are more variations for Penne pasta than mostaccioli. According to our survey, there are almost over 35 variations of recipes for penne pasta. For mostaccioli, it cuts to less than half, making only 15 different recipe variations.

There are two varieties of penne pasta and one of them is mostaccioli.

Both of these pasta is great for any kind of fresh, thick Italian sauce but if you follow our comparison chart, you will understand which sauce will work best with which pasta. Even though this pasta has different shapes, it can be interchangeable as long as you know how to make the dish tasty by mixing it with different sauce variations.

Keep in mind that penne can hold more sauce than mostaccioli since it’s rigid. Mostaccioli is more relatable when it comes to salad-type dishes. In many restaurants, they put mostaccioli pasta with cashew nuts to make a delicious type of salad.

Enjoy your delicious pasta with your favorite side dish! 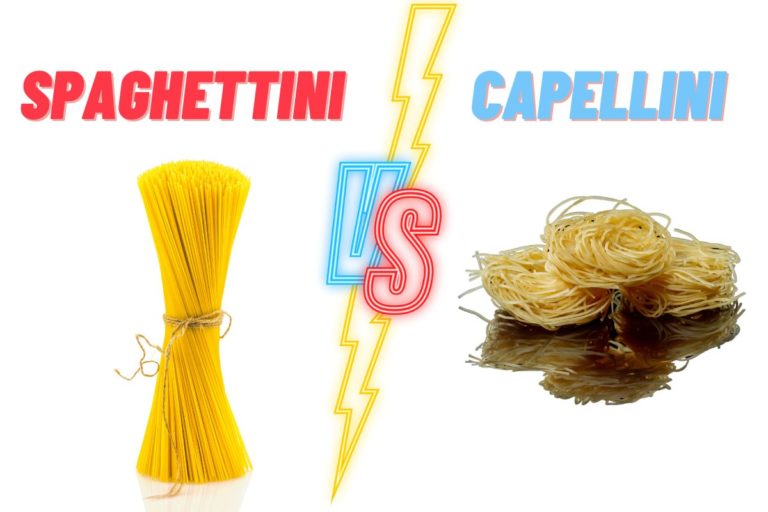 There are so many different types of pasta that it isn’t easy to know which is which, so in this post, I will explain the…